PHUKET, was the first of a few destinations we chose to spend our remaining time in Asia once we decided that we would go early to the UK to spend their summer there house sitting. The trip would be two weeks Phuket,3nights Kuala Lumpur then ten nights Penang Malaysia before heading back for two last nights in Singapore.

We got some great flights on Skyscanner covering this segment of our travels. All four flights for around $230 each.

We arrived at Phuket airport after paying to upgrade our seats for extra leg room at around 9:20 pm. The exit through was very quick and with quite a drive to Patong we were glad for that.

We have never been to Phuket before and hadn’t done a huge amount of research.

We chose to stay in Patong beach for our first three nights and then book on from there.

Hmmm. What can I say about Patong except it’s not really our scene. 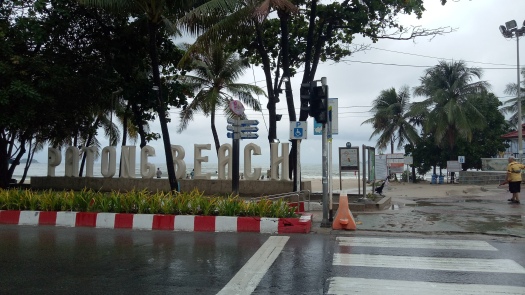 Our hotel The Tropica bungalows when we arrived was right opposite the beach and in the hub, great we thought, lively surroundings for a few nights, until we were escorted to our very well appointed room where we couldn’t actually relax due to the throbbing thud thud loud music coming from the parallel Bangla road with its night clubs, bars and sex shows.

We were quickly back at reception and changing rooms and although smaller was a lot less noisy than the last one, the thud thud was NEARLY covered by the sound of our aircon and ceiling fan.

It’s a real shame as the hotel is lovely, great pool, great room amenities and the included breakfast buffet is excellent. Around $56 a night.

The first full day we spent walking the area and having one very expensive coffee at The Coffee Club, we worked out taking all into account the mug of flat white was around $10.

We ventured out after our first full day but our second night for about an hour but after being harassed a hundred times for ping pong ball and live sex shows decided we’d seen enough of Patong night life and headed home, only to be assaulted by the morons next door drinking outside and carrying on till 6am. At about 4:30 I had finally gone to sleep as the thump thump finishes at 4 am to be woken at 5am by morons singing take me home country road!

Our last day saw us very sleepy and not tooo motivated. After another excellent breakfast we rested in our room, swam in the pool, went out for another extortionate costing coffee before we found a local family mart that made a half decent one for 30 baht or around $1.50 .

We went out for an early dinner around 5 pm again as we had done the day before as again hadn’t eaten since breakfast and a nice meal on the beach with a glass of wine went down well. We watched the last of the days parasails as the sun set over the beach and by the time we arrived home the thump thump was just starting up as it was 7 pm.

While we were out we booked our next three nights in Karon beach staying at The Baan Karonburi and another three nights at the Bandara Phuket beach resort. We’ll see how they go before booking on again, but want to spend our last night at least nearer the airport with our early morning flight to Kuala Lumpur on the 21st.

The weather gods haven’t really been favourable here so far. The first day had a lot of rain and the second day overcast with just a short shower in the afternoon.

Karon beach was sooo much nicer than Patong even though in distance it was really not far at all. It instantly felt more relaxed and the beach looked a lot more inviting with cleaner looking water and some waves.

We didn’t actually ever sit on the beach there or swim in the surf a closer look at the dirty water going in from storm water was enough to put me off and we actually hired a scooter for two days and went exploring more of Phuket.

We followed the coastline up towards Naithon on one of the days and decided that we would spend our last night here due to its proximity to the airport.

The other day we rode the coastline south and then across to the Big Buddha.

Here they have cleverly given free admission but you can buy a copper coloured leaf to write your name and date on and tie to one of the many trees covered in these thin metal leaves. There were literally thousands of them and looking at the dates they must clear them at the end of each year as they all had 2019 on them.

The views are awesome as expected as there is a view of The Big Buddha all around the island. 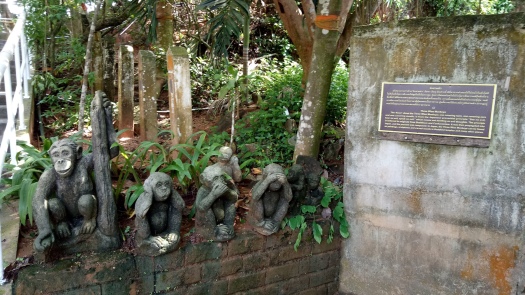 I’m so glad that James has ridden bikes most of his life as I would hate to be riding in Asia with no previous experience.

The one thing we noted was that a lot of the beaches and villages looked great from a distance but up closer are suffering from that lack of rubbish removal that you find in so much of Bali etc. a real shame. We were beginning to feel that this would likely be our only trip to Phuket as we were hoping to find something cleaner than Bali but with similar pricing. So far that wasn’t being the case.

We had booked three nights at Bandara Phuket beach resort after speaking to some fellow Aussies whom had just stayed over this way. Luckily for us we decided to check it out.

What a find. The area is more exclusive private villas than teeming with resorts and as it’s the off season fairly quiet anyway. The beach is clean and water a lovely turquoise and our hotel was excellent value. If only it had the great breakfast buffet of the hotel we had in Patong it would be perfect. Breakfast is included and there are choices just not as great as the other hotels we’ve stayed at.

We walked along the beach and quickly decided we would book another four nights and just take a day trip to Phi Phi Island.

We took the photo below as everywhere we go we seem to find a bar called The Ship Inn. 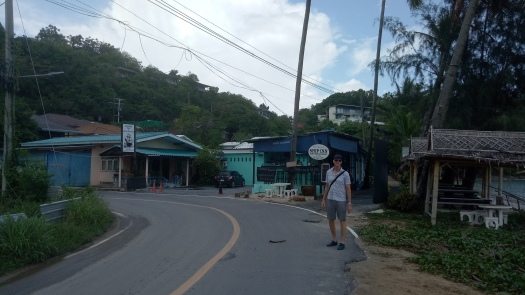 The food from the menu here has been great value and a good choice (unlike the breakfast) and with two drinks for price of one between 12-2 pm and again 5-7pm meaning $5 cocktails we’ve been happily going through the cocktail menu.

We again hired a scooter for a day and checked out a bit more of the area, not finding anything we liked better than where we are, so it’s kindles out and relaxing before we fly for three nights to Kuala Lumpur on the 21st May. 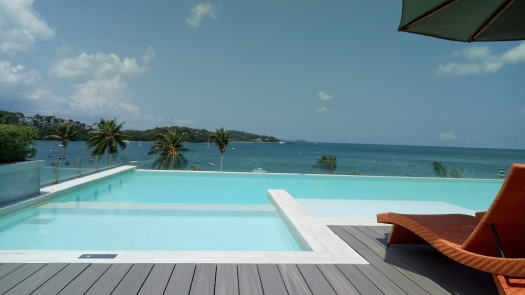 Transfer from hotel to port with coffee, tea and bikkies while we wait for all the transfers to arrive. Then onto the speedboat and away…..

Maya beach has been closed to tourists but they still take the boat in to have a quick look and photo opportunity along with Viking cave . A couple of really great snorkelling spots including two hours on an island and buffet lunch at Phi Phi Don complete a wonderful day and the weather played nice. It was a full boat of around 30 and James and I along with one other Australian couple were in a real mix of Asian tourists , USA and even the Bahamas was represented. One thing we’ve noticed in Phuket is the large contingent of Russian tourists. 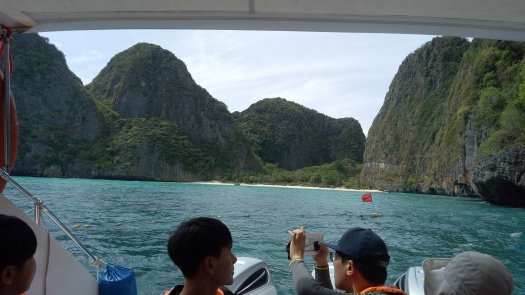 Back to our hotel in time for happy hours 5-7pm and it was a three cocktail night Swith a spicy pasta for dinner ending a great day.

The photo below is the hotel at night and Anna the lovely waitress who was just delightful. 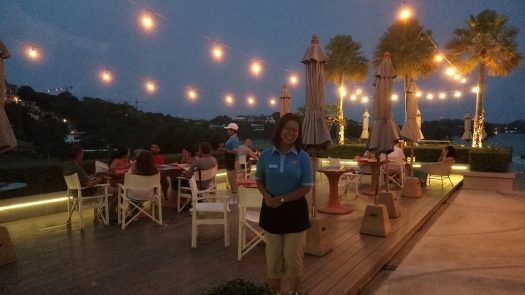 We spent our last two full days basically pool side. The Saturday was Australia’s Election Day and most of the Aussies here we’re keeping each other updated.

Outside the front of the hotel each evening they put on a bit of street food and music and two nights we’ve gone down to eat.election day was a Buddhist holy day and no alcohol sold at hotel or local family market so it was fruit juices and an alcohol free day, actually there were beers in the minibar in our room James thought about them just as we decided to go to bed…

WHAT WE’VE LEARNT ABOUT PHUKET.

It’s not as cheap as Bali.

It’s good to travel here early off season to get great hotel and tour deals.

Don’t stay at Patong… EVER

a scooter is a great way to get around as taxis are expensive here.

Stay close to airport if you have an early flight.