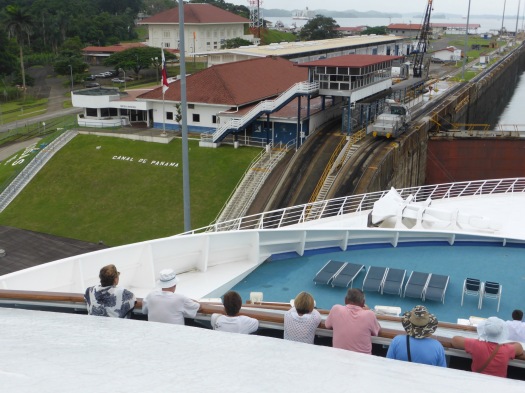 So so different to the Suez Canal, The Panama was a marvellous day watching with great interest the wonderful engineering that is the workings of The Panama Canal.

With our late departure from Cartagena our transit through the canal started a little later which was probably fine by all of us onboard as we were able to get up and breakfast before finding our positions to watch the first loch approach.

During the day we again as we did with the Suez, moved around from side to side, back to front and relaxed by the pool and enjoyed several dips in as it was a steamy hot day.
It was basically a full 12 hours from start of our transit till 8:30 pm when Captain Aldo came on speaker to say we were officially through and into the Pacific Ocean again and about to farewell our pilot boat.
The first lochs were the Gatun lochs and there were three we needed to transit through.